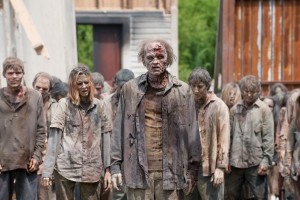 The Captain Meriwether chapter of the Association of the United States Army is making plans for its third annual 5K Zombie Apocalypse Run on June 4–an event that aims to enlist new members to the local chapter and its sub-chapters in the South Puget Sound.

Recently I was given the opportunity to write a story that will preview the event in the Thursday, May 26 print edition of The Ranger (read by the military community at Joint Base Lewis-McChord)

Doing this story opened me up to an underground of believers who genuinely think the Zombie Apocalypse will soon be upon us.

It’s very possible that the hugely popular The Walking Dead series on AMC, along with a gamut of other zombie-related films and television shows, has brought on this fervent belief.

There are studies on the Web claiming what states will be most affected by the Apocalypse, and which ones will be left unscathed.

But one of my favorites is the Centers for Disease Control’s playful tongue-in-cheek attempt to jump on the band wagon: Preparedness 101: Zombie Apocalypse, where the organization explains that an emergency kit that you would use for a more traditional pandemic or epidemic, could also be applied to a Zombie Apocalypse (something they explicitly explain is not real)

In my opinion, if the Centers for Disease Control has a blog post on how to prepare for the Zombie Apocalypse, albeit even if they denounce the possibility, I’m sure there are a handful of people out there carefully taking notes and believing the CDC’s spoof as fact.

Now, that is scary!